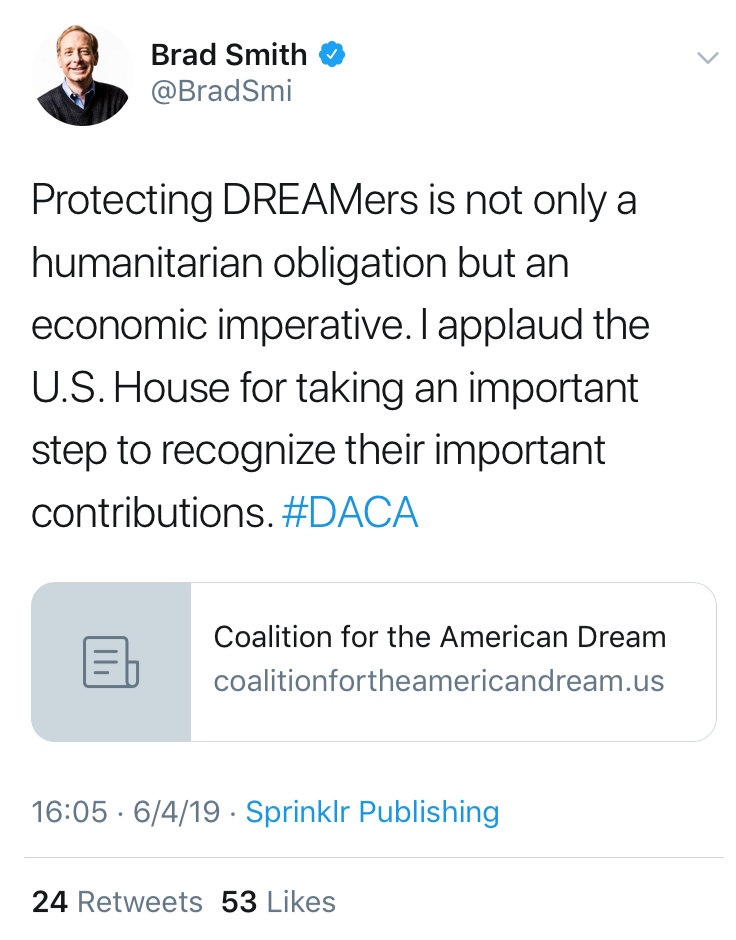 On March 31, 2019, Microsoft gave $10,000 (the maximum amount allowed by law) to Senate Majority Leader Mitch McConnell, who is the key figure preventing DACA legislation from reaching the Senate floor.

Microsoft has given over $100,000 in political donations to DACA opponents since Trump attempted to cancel the program in 2017.

DACA recipients and H1-B visa holders working at Microsoft are barred from "PAC 101" information sessions where they could confront management about these donations.

The head of Microsoft PAC has warned employees that talking to colleagues about the PAC may be construed as harassment. 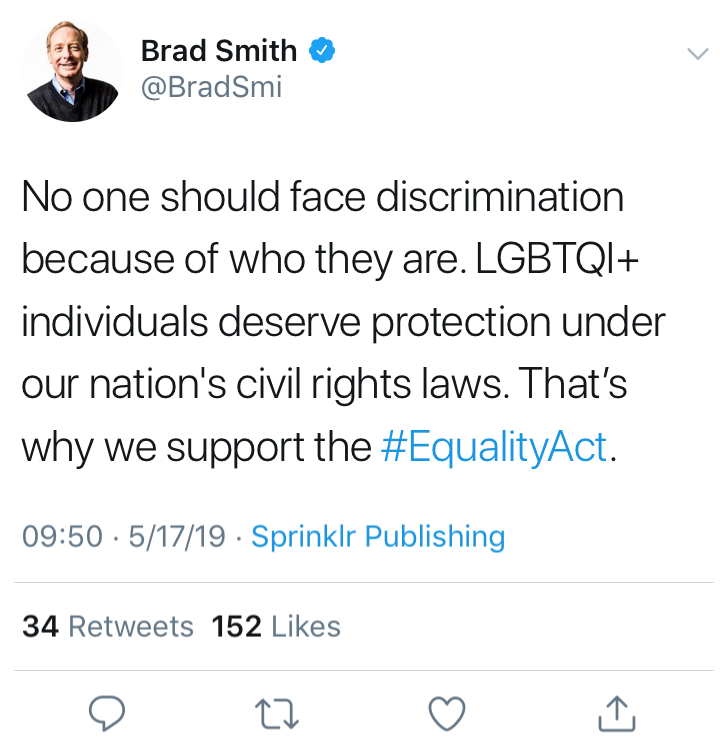 Of the 173 legislators voting against the Equality Act, 63 received political donations from Microsoft, totaling over $170,000.

On May 3, 2019, Microsoft made a $5,000 donation to House Minority Leader Kevin McCarthy, who headed the opposition to Equality Act.

In March of 2019, Microsoft donated $10,000 to Mitch McConnell, the figure responsible for keeeping the Equality Act from getting a Senate vote. 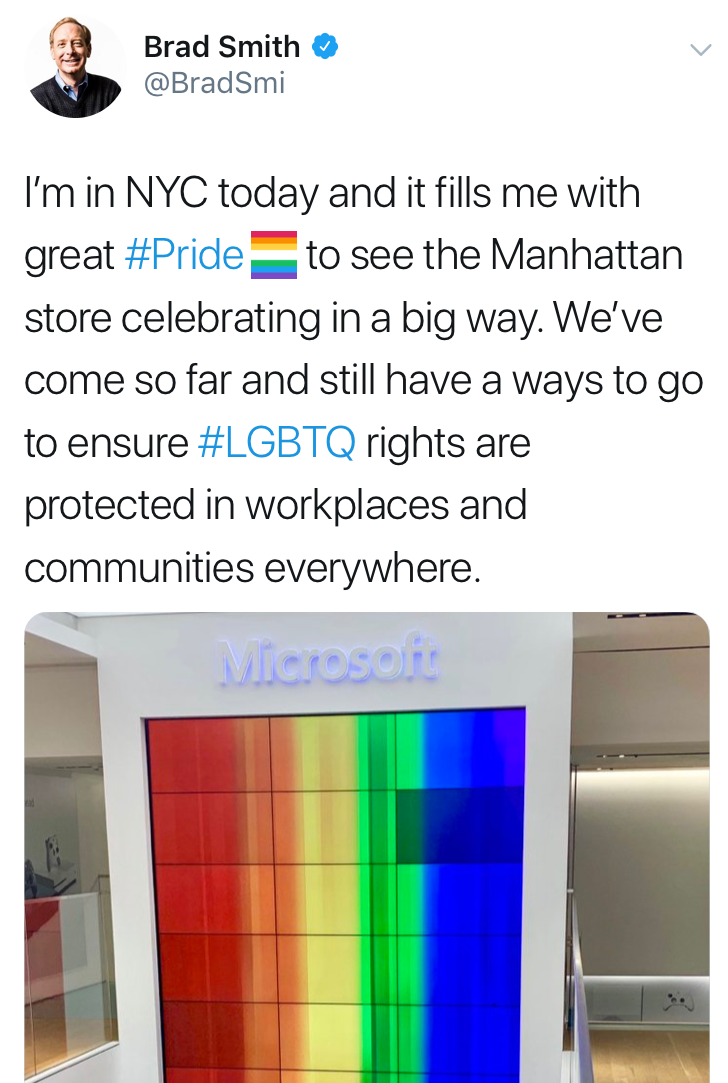 On May 3, 2019, Microsoft gave $5,000 (the per-election maximum) to staunchly anti-LGBT congressman Kevin McCarthy.

In the 2018 election cycle, Microsoft gave $3,000 to Virgina Foxx, the North Carolina congresswoman who in a 2009 speech on the House floor called the fact that Matthew Shepard was killed for being gay a 'hoax'.

On May 8, 2019, Microsoft gave $1,000 to Robert Aderholdt, who in 2018 introduced an amendment that Human Rights Watch says "would have forced the federal government to fund adoption and foster care agencies that discriminate against LGBT people for 'religious' or 'moral' reasons."

On May 22, 2019, Microsoft made a $5,000 donation to self-described "David Duke without the baggage" Steve Scalise. Scalise has spoken at a white supremacist rally, and in front of the radically anti-LGBT Family Research Council.

On May 15, 2019, Microsoft paid $2,500 to Mike Rounds on May 15. Mike Rounds is a co-sponsor of the First Amendment Defense Act in the Senate, an attempt to broadly legalize discrimination against people on the basis of their sexual orientation.

Microsoft gave $1,000 to Mark Walker in 2018. Reacting to the landmark 2015 decision legalizing same-sex marriage, Walker said: "Today, the Supreme Court in Obergefell v. Hodges made a decision to overrule our democratic process and our foundational individual freedoms." 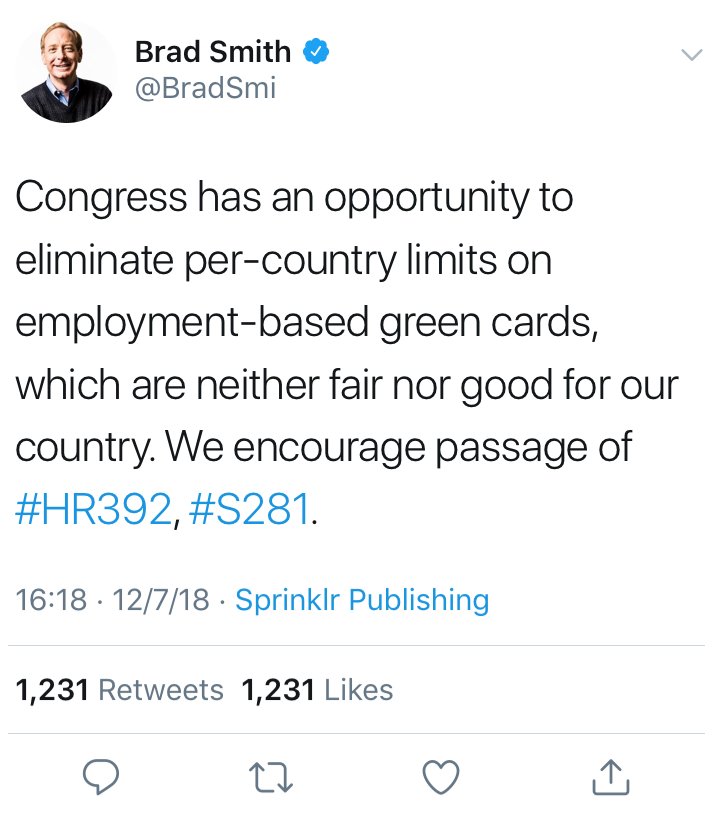 On July 10, 2019, the House of Representatives voted on the Fairness for High-Skilled Immigrants Act of 2019, which would lift per-country green card caps.

Despite its very public support for this bipartisan bill, Microsoft made political donations totaling $46,500 to 18 of the 65 representatives voting against it. 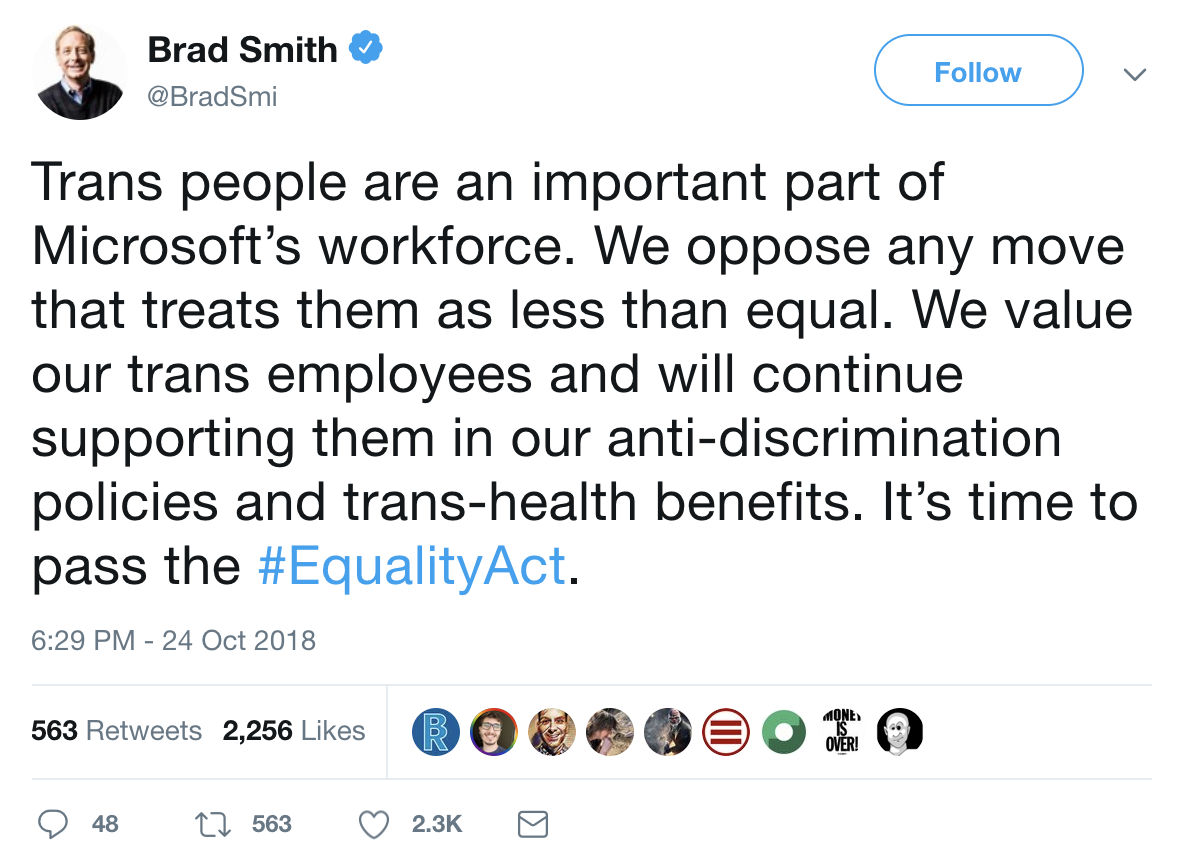 In 2017, Texas Senators Ted Cruz and John Cornyn recommended Jeff Mateer to a lifetime appointment on the Federal bench. Mateer's nomination sank after it was revealed he once described transgender children as part of "Satan's plan", but Cruz and Cornyn never withdrew support.

On October 11, 2017, and again in September 2018, Microsoft made donations totalling $2,000 to Rep. Mark Meadows, widely reported as one of the key voices demanding a transgender ban in the military.

Microsoft made a $2,000 donation to Florida Congressman Brian Mast, another vocal opponent of trans people serving in the military. 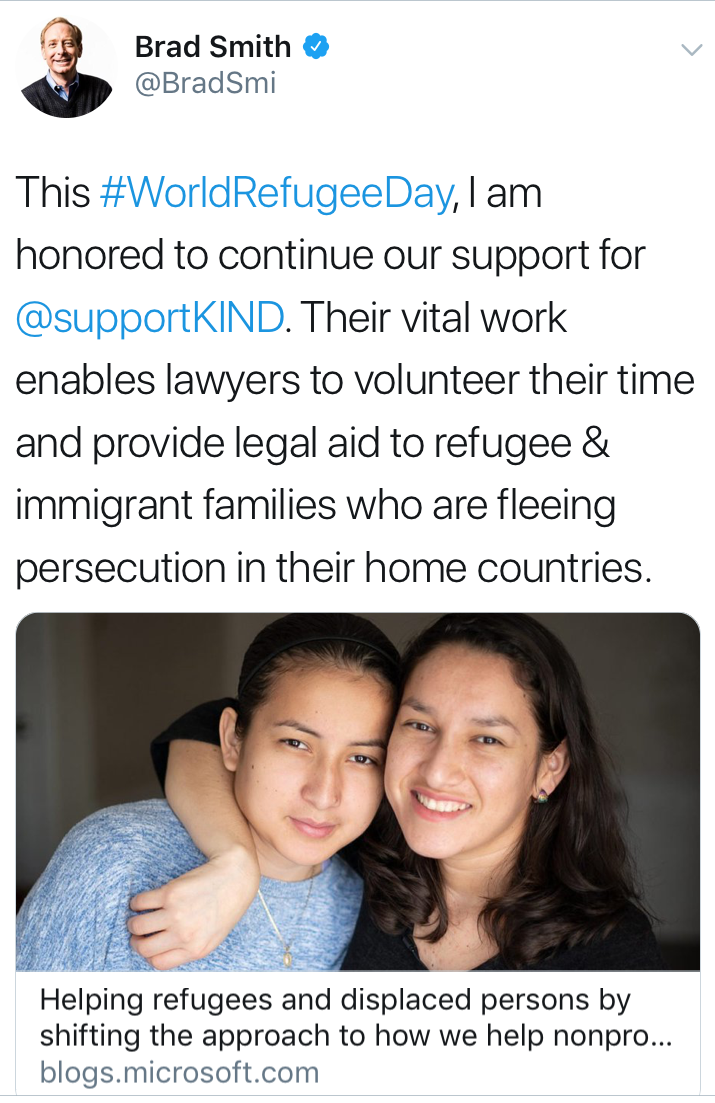 In February and March 2019, Microsoft gave a total of $6,000 to Alabama congressman Bradley Byrne, whose Senate campaign page promises to stop migrants by "any means necessary".

In 2018, Microsoft gave $1,000 to Joe Wilson, who supported President Donald Trump's 2017 executive order to impose a temporary ban on entry to the U.S. to citizens of seven Muslim-majority countries. Wilson said that the order would "secure our borders and keep American families safe from terrorist attacks."

Also in 2018, Microsoft gave $5,000 to Ted Cruz, who has defended the Trump administration's policy of separating migrant children from their parents.

Microsoft continues to give material support to Immigration and Customs Enforcement agents separating families at the border, according to the New York Times. 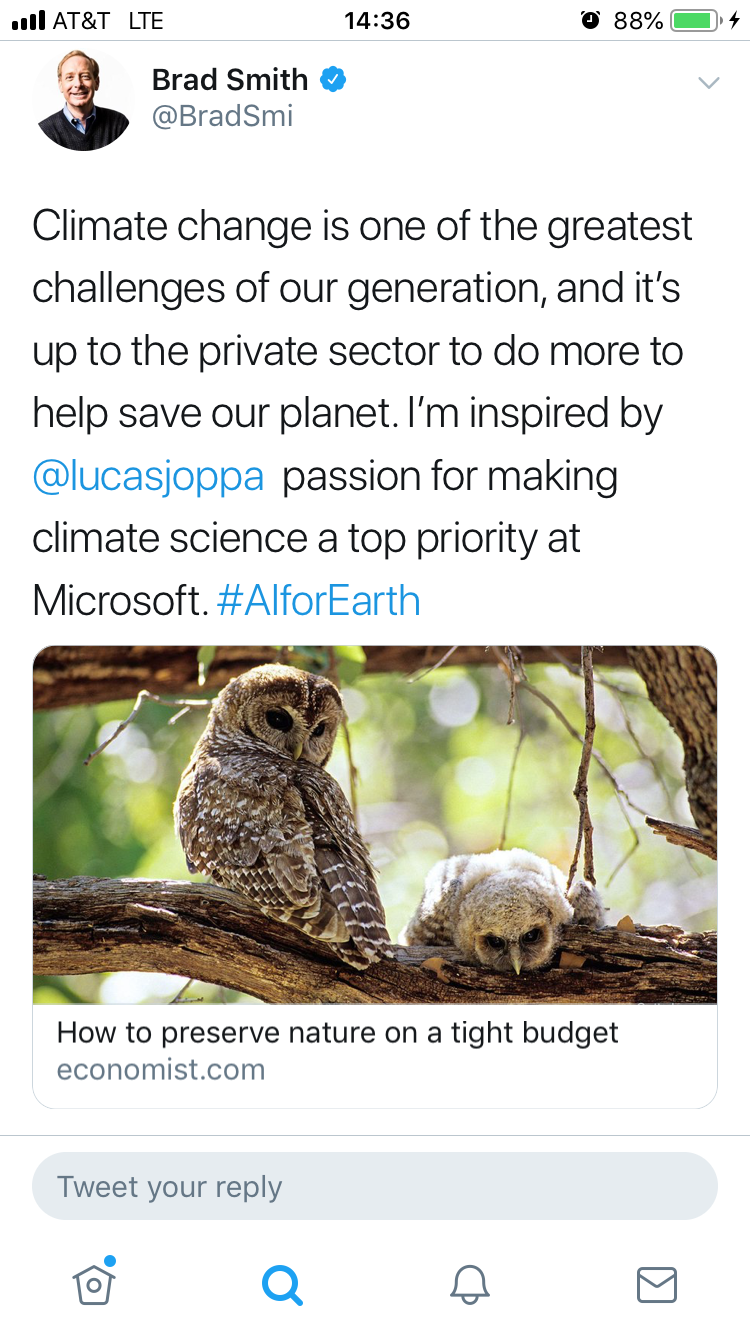 In 2018, Microsoft gave $5,500 to Congressman Kevin Yoder who supported President Trump's withdrawal from the Paris Climate Agreement, saying that the costs of the agreement outweighed the benefit.

Also in 2018, Microsoft gave $5,000 to Ted Cruz, who rejects the scientific consensus on climate change. In March 2015, Cruz said that there had been no significant warming in 18 years.

On May 17, 2019, Microsoft donated $2,000 to Rep. Jim Sensenbrenner, who has falsely claimed “there is no scientific consensus on how much human action impacts the climate.”

Microsoft gave $3,000 in 2017-18 to Andy Biggs, who said in 2016 “I do not believe climate change is occurring. I do not think that humans have a significant impact on climate.”

In September of 2018, Microsoft gave $1,000 to Debbie Lesko, who said in a candidate debate “I think it just goes through cycles and it has to do a lot with the sun. So no, I'm not a global warming proponent.”

Speaking on the Senate floor in March 2019, Sen. Mike Lee argued that “the solution to climate change is... fall in love, get married, and have some kids.” Microsoft gave him $2,000. 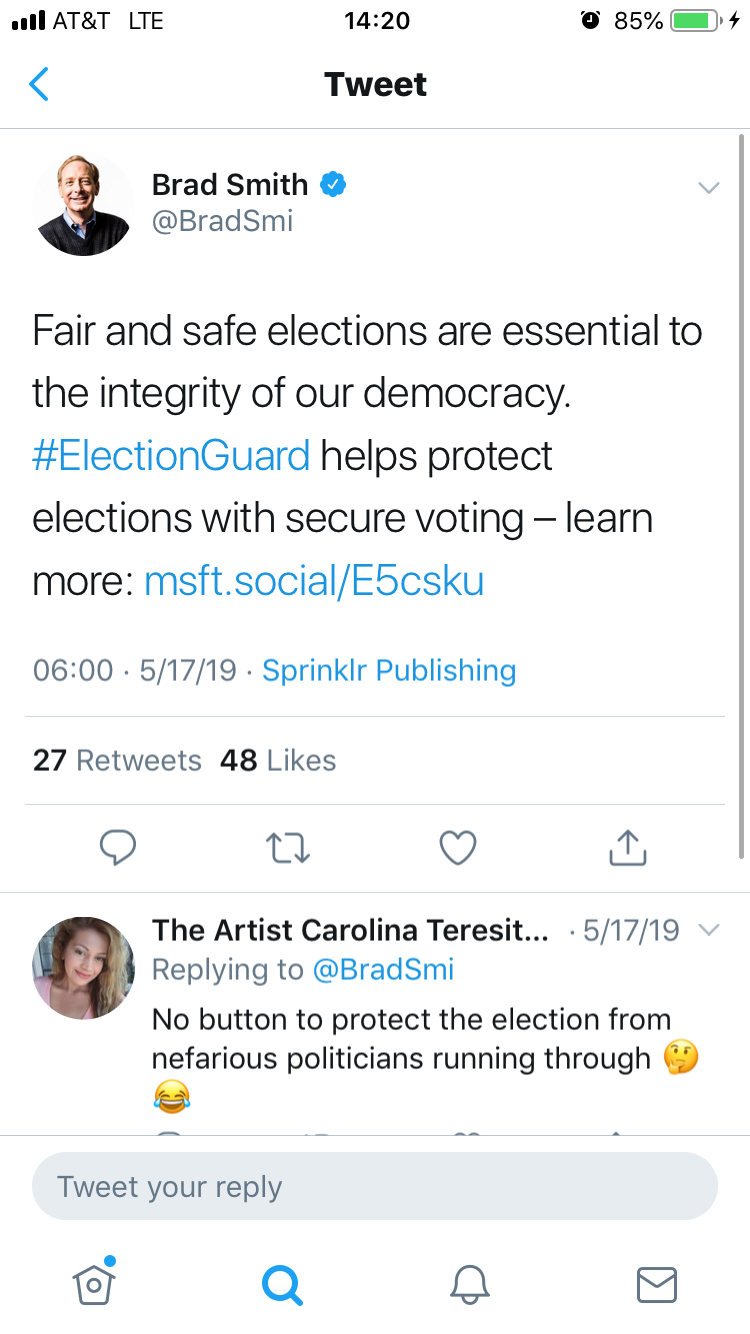 Microsoft also made $4,000 in donations to Devin Nunes, who headed the farcical House Intelligence Committee investigation on Russian interference until forced to withdraw.

Microsoft gave $2,000 to Rep. Mike Conaway, who replaced Nunes on the Russian investigation and then killed it.

For corrections or additional submissions, or for information on how to reach other Microsoft employees working to de-fund the PAC, contact me on Signal at (415) 610 0231, or at maciej@ceglowski.com.